Built more than 420 years ago

The hotel with history

The Hotel The Square, built around 1600 at the latest – a four-storey eaves-sided building with a gable roof that protrudes from the building line by the depth of a window axis – marks the beginning of Ketschengasse.

A historical figurative stucco ceiling, which was renewed in 1988, has been preserved on the third floor, which is a half-timbered structure. In the 18th or 19th century, the slated dwarf house was put on. On the ground floor, major renovations were carried out in 1926 to expand the shop, whereby the shop window was enlarged and finally turned back into a shop entrance in 1991.

In the rear courtyard, four-story open wooden arbors flank the sides. The back of the courtyard forms the back of the house at Kirchgasse 8. The courtyard ensemble was renovated in 1986 after a mediaeval fountain had been discovered there a year earlier. 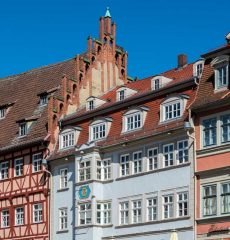 Hotel right in the heart of Coburg

The Hotel The Square is located directly on the market square in Coburg. Parking garages are within walking distance.

“Schlossplatz”, theater, Coburg Castle, market square, cinema, shops and restaurants can be reached by foot in a few minutes.

The central station for trains and busses is approx. 700 m away and the next highway can be reached in about 6 km.

Your hotel in Coburg

Experience the flair of the historic Coburg old town. Our historic house, located directly on the market square, awaits you with modern rooms and an impressively central location, so that you can reach many of the city’s highlights in just a few minutes on foot.